skip to main | skip to sidebar

Rain in the desert 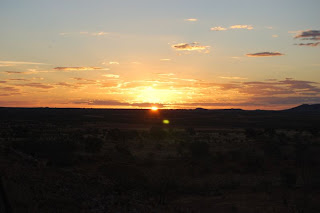 Since I’m living in an English speaking country for more than two years now, I should start writing in English… 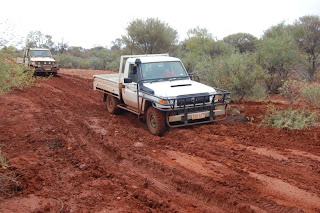 During the last weeks it got constantly colder. The sun still tries its best to warm my freezing body but the never ending wind wins this game. At night I’m buried under three blankets, shivering in temperatures around 0 degrees.
Clouds are coming from the East, building up and throwing shadows over the desert. The wind increases, rattles on the windows, shakes the trees and makes my curtains move…although the window is closed! 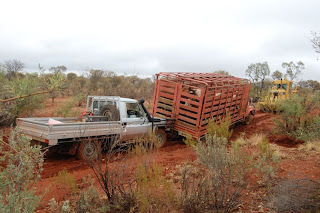 The leaves on the handful of trees around the homestead are changing their color to yellow until the wind blows them away.
Finally one night the rain is coming. The first drops hesitantly hit the roof, then pouring down the rain fills dams and waterholes, rivers and creeks and washes out our roads, creating mud lands and making the roads finally impassible. Everything is flooded.
As quick as it came the rain is gone and the dry hard earth stills its thirst and sighs. The lakes and waterholes vanish in hours, only the mud stays, like a reminder of a forgotten event. 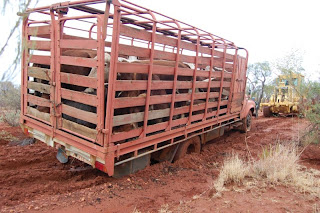 The rain caught us in the middle of trapping/drafting. Everywhere were cattle trapped in yards, waiting to get picked up. The truck got already bogged after a couple of meters, tires spinning in the mud. We had to pull and push it out with two jeeps. After 2 hours and 10km we gave up and went to get a grader. The grader pulled one cattle trailer and was just able to get trough the crossings and holes. By the way, its just amazing what you can do with this work vehicles. They hardly ever get stuck (depending on the driver though) and go through more than a meter of water! And on this day I had the permission to get them dirty :-) 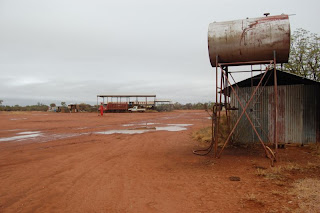 The cattle work in the yards was a dirty job as well as we had to run around in knee deep mud to chase the cattle. A Kiwi-girl and I were pushing the cattle into the forcing pen to supply the guys down the race who were cutting their horns off etc. As we could easily keep up with them we came up with the idea to get the cattle going without raising our voices or yelling…and it worked. Once the cattle were trapped in the race, they got upset and agitated and I was able to calm them down by talking to them and doing special noises. From this day on my nickname has been the “Cattle Whisperer” :-) 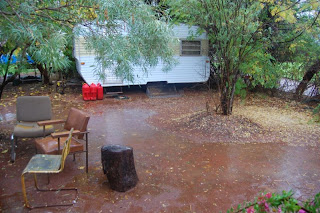 I should mention that I changed stations again. I’m back on Maryvale Station together with Vera, a German girl and the Kiwi-couple. Unfortunately I still can’t get along with the Kiwi-guy so we had our first argument the day I arrived. Since then I have to pull myself together every day to not just quit my job as I actually need the money of this month’s wage. Although a very good experience station work is not what I’m looking for and so I’ll move on at the end of June. I’ll drive to Darwin to pick up my parents and go on a 5 weeks trip with them, visiting all the important National Parks around Darwin, going through the Kimberley’s and 1000km off road on the Tanami Track through the desert towards Alice Springs, visiting the two cattle stations I stayed on and finally driving down to Ayers Rock and Kings Canyon. Most of it off road, naturally :-) 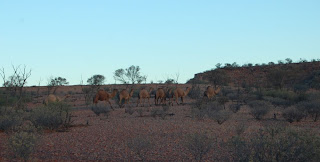